Integrated zoned paging, messaging, and music system helps staff and hundreds of volunteers of a new 350,000-square-foot facility streamline packaging, delivery, and distribution of meals to more than 29 Georgia counties.

In the “old days,” communication among the workers at the Atlanta Community Food Bank could be described as strained. It’s not that the staff didn’t get along or that they possessed poor listening skills. Working toward a common goal of providing meals daily to food pantries and other charitable organizations throughout northern Georgia had created tight bonds among the hundreds of employees and volunteers who donated their time at the 150,000-square-foot non-profit distribution warehouse.

Poor communication within the busy facility stemmed from an antiquated PA system. “The audio quality was unintelligible,” says Greg Austin, CEO of Marietta-based technology integration firm Austin Technology Group (ATG). “With forklift and truck engines running and personnel moving quickly from one part of the warehouse to another, it was next to impossible to hear critical messages dispatched over the system.” Then there was the matter of music. It was available to volunteers via separate local audio systems, but unfortunately, the tunes would often drown out the PA announcements.

Recognizing the importance of intelligible audio and a more streamlined, unified approach to audio control, administrators placed a more advanced communications infrastructure on the top of their to-do list as plans for a new 350,000-square-foot Food Bank rolled out. Handling the specification, design, installation, and configuration of the music and messaging solution was ATG. “There were three primary components that needed to be addressed,” Austin relates. “PA, music, and intercom. Being an AtlasIED dealer since 2016, we knew products in their portfolio would satisfy all three objectives for this project. Its communications solutions are rock-solid and could be easily scaled to cover the entire distribution center and expanded to support future needs. AtlasIED’s local manufacturer’s representative, Jeff Craig, president of Professional Sales Agents (PSA), was instrumental in helping with design and specifications, and securing the attention of the manufacturer.”

When critical announcements go unheard, it impacts both workflow and personnel safety. For the new Food Bank distribution warehouse, a more advanced RingCentral Voice over IP phone system was installed, and to it, ATG added an AtlasIED IPS-ZC4 SIP-to-Analog Controller. The integration enables staff to dispatch announcements via any phone handset to 75 AtlasIED speakers in any or all of four audio zones. Given the size of the facility, the speakers are powered from several different locations. AtlasIED’s Dante™-compliant 800- and 1200-watt power amplifiers enable zones to be connected over the building’s fiber network.

The quality of the speakers enhanced intelligibility even further. “Thanks to AtlasIED’s extensive speaker lineup, we were able to select speakers that would perform best in a wide range of work environments--from the noisy delivery and pick-up bays to the packing areas and freezers,” Austin says. For the Food Bank speaker lineup, ATG chose AtlasIED AP-15T horn loudspeakers, PM8GD-B pendant mount speakers, and SM52T-B weather-resistant speakers.

Pleasing background music cultivates an enjoyable, productive work environment, so included in the audio plan was an AtlasIED BlueBridge digital signal processor. Rather than have it function autonomously, ATG integrated it with the PA system so that music temporarily mutes as messages are delivered. For added enjoyment and convenient control, volunteers can stream music to the system via personal Bluetooth-enabled mobile devices.

When 100 or more trucks pick up and deliver food to the warehouse every day, fast, reliable communication of their arrival is critical to safety and productivity. “The Food Bank staff need to know from which organization the truck is arriving and at which of the 34 cargo bays it will park to ensure loading and unloading is done in a timely manner,” Austin explains. “To streamline communications between truck drivers and staff, we added intercoms to the Food Bank’s audio network.” From several intercoms stationed at the entrance to the 20-acre site, drivers may call the proper department upon arrival. Staff may speak with and direct the drivers from phones on the RingCentral VoIP system.

Now that messaging, music, and intercom communications are handled via a unified network, the Atlanta Community Food Bank is primed for productivity. Staff and volunteers are able to more actively engage with one another, expedite food delivery and pick up, and relish a working environment that’s safe and comfortable. Through generous product and design contributions from AtlasIED, PSA, and ATG, and the integration expertise of ATG, the Food Bank can continue to feed hungry families throughout northern Georgia. 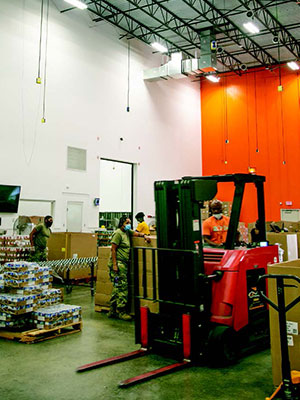 “The Atlanta Community Food Bank's new building will help us engage more people in the struggle to end hunger. We are extremely grateful to partners like ATG and AtlasIED who co-invested with us to provide outstanding audio equipment for our new building's warehouse operations, volunteer center, and conference rooms.”
— KYLE WAIDE,
Atlanta Community Food Bank
President & CEO 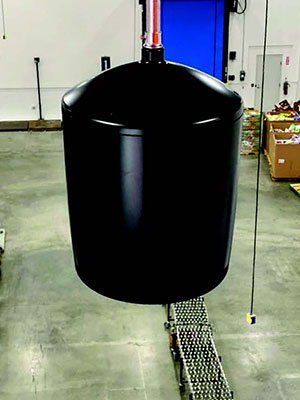 Products
Solutions
Support
Resources
Contact Us
About Us
Careers